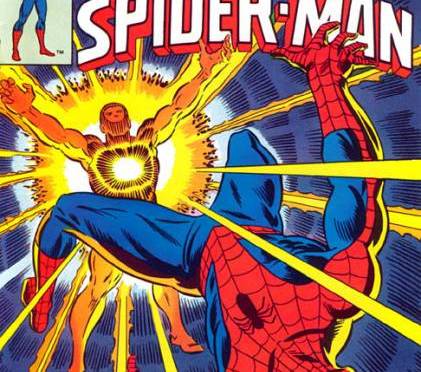 I’ve been a dedicated Spidey reader since 1990. That’s 26 years of adoration for one of the most colorful characters ever put to print. And I’ll openly confess that I cannot for the life of me remember the villain, Lightmaster. Maybe this guy was a, pardon the pun, flash in the pan, but maybe I’m wrong and issue three of Spectacular Spider-man will rekindle some memories or answer my little burning question: who in the world is Lightmaster?

The book opens with Spidey doing what Spidey loves to do, web-swinging his way through the great New York. All is peaceful and light-hearted until he spots a group of hoodlums giving an elderly gentleman he’ll just for “entering their turf.” Spider-man, of course makes very short work of these ruffians. But the most interesting moment in the whole ordeal is that the elderly gentleman Spidey saved, initially shows fear of the hero. It only takes for Spider to ensure grandpa that he’s only there to help, not hurt. As Spidey swings away, and another local rushes to the old man’s aid, only to disparage Spider-man, the old man cuts her off, a look of awe, respect and gratitude in his eyes, “No. Good man!” Spidey doesn’t get to hear it, but there’s something touching in this brief moment, something that instills a sense of hope and optimism in the reader, knowing all the good Spider-man is capable of isn’t going entirely unnoticed.

Back to the skies for Spidey, who’s still working at wrapping up the case involving Tarantula and Gorman and Lansky, the latter two of which have been kidnapped.

Speaking of that specific element of this story arc, we swap perspectives and see that Tarantula and Gorman are bound in a posh townhouse. Tarantula breaks free of his binds, but quickly renders Gorman unconscious. Tarantula is out to settle things up with his former employer, who he assumes is the one responsible for turning the tides and kidnapping him.

And then we get a surprise in the form of Lightmaster, who now seems to want to test his superpowers against Tarantula. So, is Lightmaster a hero? An antihero? An outright villain? We’re on the cusp of learning the answers to those questions!

As it turns out, Lightmaster is somehow able wield the force of solid light, and Tarantula proves to be no match for such offense. But who’s next on Lightmaster’s hit list? We’ll find out soon enough, but Lightmaster’s attitude and statements make it relatively clear that he’s no hero, and he’s no antihero. He’s hungry for power and intends to take it, leaving him and only him as the most powerful force in the city.

Scary stuff. Somewhere Spidey might be shaking in his boots… or sweating in his tights.

The truth is Spidey is headed back home for a hint of normalcy. He arrives to find that he’s already got company – mistaking him for being asleep in his room – in the form of Flash and Glory. He sneaks right by them, makes a quick change and emerges looking just as Flash had imagined, fatigued and decked out in a robe.

The three are soon off for a meal, and we get an interesting look at the inner workings of Flash Thompson. Once little more than a bully on a mission to compensate for personal deficiencies, Flash has become something of a friend to Pete. And while he still tends to do some posturing, he’s a good friend. When the trio arrive at the restaurant Flash notices a woman from his past – presumably a woman he met while fighting in the Vietnam War  (yeah, Flash had grown up a lot by 1976), but Sha Shan, as he calls her, is alarmed by Flash’s appearance, and she disappears before the three are asked to exit the restaurant for causing unnecessary ruckus in the establishment.

Spider-man (still looking like nerdy old Parker) departs abruptly, spotting a strange unnatural light coming from City Hall and given recent events, Spidey figures there could be trouble. At the midway point of the book Spidey runs headlong into that trouble, and we get our first official introduction between Spidey and Lightmaster.

Lightmaster proves to be a worthy foe and he takes round one decisively, beating Spider-man down before escaping with another council member in tow. Whoever Lightmaster is, he’s connected in some way to some powerful players in New York. As for the Web-Slinger, he’s off to nurse some wounds unexpectedly incurred while tussling with what may or may not be a “new” rival after all.

Later Pete does some digging and unearths what he believes to be an answer to the new local problem known as Lightmaster. It seems Peter has put the pieces together; he shocks Dr. Lansky, a former physics professor who specialized in light phenomena. Catching this new villain off guard should serve Spider-man well. It definitely affords him some insight into Lansky’s motives. He intended to eliminate Gorman and some corrupt officials who shut down funds on his research.

So, backstory of Lightmaster solved. To be entirely honest, it’s a little bit of a bummer as this could have been a character fueled not only by his insane power, but some mystery as well.

Spider-man does a great job of luring Lightmaster into open territory where he can successfully get the upper hand on his overconfident opponent. Ironically, he uses information he collected by reading some of Lansky’s own theories on light to bring the battle to a halt and the Lightmaster  to an end. Will we see this promising villain again down the line? I’d provide you with a solid answer, but as noted at the beginning of this article, I can’t remember the Lightmaster, at all!

I’m secretly hoping he returns as a stronger force somewhere down the line.

Great book, intriguing new villain and a ton of action. What more could we possibly ask for? Maybe a little romance for Pete? We’ll see!